Made on Our Land: Aboyne 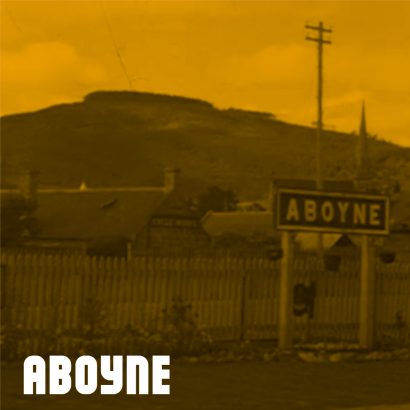 I felt a bit scared when I received a commission to write and perform a piece of spoken word responding to a nine minute silent film from the fifties. These were my thoughts:

Are you sure you got the right person? What if two minutes is the maximum poem length I can write? What if there’s not enough time to craft the words before the performance? What if I can’t write it? What if it’s rubbish? What if I perform it and everyone hates it?

I also felt a tiny bit excited – it was a new challenge, a chance to learn and grow. Shona had seen a previous film poem I’d written, and she loved it enough to ask me to respond to something she was working on. She wanted to pay me. That’s got to be a good thing, right? I chatted to my sister and she said:

You should have at least as much faith in your writing as the person who is commissioning you, they’ve seen what you do and they think it’s good.

So, after asking to see film footage… I eventually said yes!

I think writers often think you’ve got the wrong person – especially if we’re asked to do something new. That’s every new book by the way. But at some joyful point during the process you’re totally alive and loving it. And then you think maybe you just got carried away in the moment and what you’ve written actually isn’t that great. And you spend a long time rewriting. And you just have to get on with making it better because it’s your job. If you’re a fire fighter there’s not time to mess around thinking “What if I’m not good enough to put out this fire?” You just use your experience and do your best. And it’s like that with writing. But with much lower stakes – no danger of death – just a looming deadline.

I was also asked to be a panel guest, after the event. I was okay with that bit. Chatting is easier than writing.

Around eighty people with an interest in local history and archive film came to the cinema in Aboye in Aberdeenshire. They watched a wartime film encouraging people not to leave the Highlands in search of the big city and another film encouraging planting crops in allotments to make the most of the land we have. They were brilliant and really entertaining! 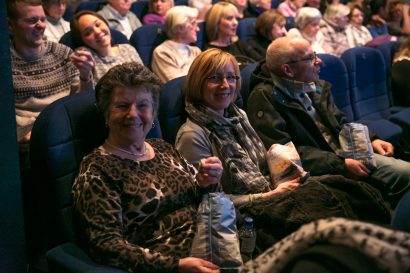 Guests were encouraged to chat about the films while they watched. Then came the two Taggart films. A mother daughter film making duo. The Taggart family moved from their family business at the granite yard in Aberdeen to a rural farm and rural life. The films documented their new life on the farm over the first year. Planting, building, celebrating and working the land.

I’d been thinking a lot about origins and geological time.  I’d just been to see ‘Deep Time’, the spectacular opening ceremony of the Edinburgh International Festival. Projection of volcanoes and stars documented the history of Edinburgh and the Earth itself with music from Mogwai.

I loved the theme. I’d listened to podcasts and read articles interviewing researchers and professors about it. I studied geophysics so I had a bit of background knowledge but it was great to build on that. I decided to make the piece about origins and geology – with a focus on granite because of the Taggart’s move from the granite yard and with Aberdeen being the granite city.

I watched the film a few times and researched granite. The potatoes reminded me of the brown potassium feldspar crystals. There was a section of the film where a pyramid roof was being lifted up onto a building, just with people and long wooden leavers. It was amazing to see them do it like that – it made me think of the ancient Egyptians building the pyramids and how granite and marble cutting is the oldest known industry in the world. I decided to start the piece with a quote from Isiah which is about looking back to where you’ve come from – it was written after the Israelites had left the granite yards of Egypt. It’s also about digging – there’s lots of digging in the film.

Every day I watched the film again, searching for meaning. I worked on crafting and shaping the words and timing them to fit with images. I finally got the words organised into three acts. I sent this summary to Shona:

1: Where are we from?
All about origins. Where are they from? (the Granite Yard) and where are we from as humans. Layers in the landscape and in geological time. Establishing the family came from Granite. This was the rock that built them. Missing the former things. What granite stood for. What it made for them. How they underpinned everything. With metaphor of granite as the baserock for all our continents – everything.

2: Where are we now?
Building again – starting something new. Building on the former things. Renovating. Comparing and contrasting the new rural life with the old one.

3: Living in the present
Coming to acceptance of the new thing. Realising the beauty in agriculture and yearly cycles of time instead of the vastness of geological time. Being present and grateful in the moment. Celebrating the small things. Ending on the beauty of the question and a question about the origin of everything – refers back to the big bang.

On the way up to Aboyne, the curator of the project, Shona Thompson read my words while she prepared questions for the panel discussion. She was excited – she thought they were beautiful. If she was pleased, I was okay. After that, I relaxed.

That evening I was munching fish and chips in the car in Aboyne in the rain (yes, welcome to Scotland) and I realised something.

I used to be so nervous before event, I couldn’t eat a thing.

I said that to Shona and she laughed and made a comment about how that had clearly changed! I chuckced the chip papers into the bin and we drove to the cinema.

And I still felt nervous but not ‘about to vomit’ nervous. I loved watching the other films and when it was time for me to perform along to the last film I felt okay. I’d done my best in the time I had and I’d really enjoyed the writing process along the way.

Since the performance I’ve had a lovely message through my author facebook page:

I attended Made on Our Land event in Aboyne recently and really enjoyed both the films and your poem. I am gearing up to enter my third year at Gray’s School of Art in Aberdeen and have been thinking about the imagery of granite you used and its potential to form an element of a painting. I wondered if your poem is available online anywhere as I would be interested in reading it.

So that’s super exciting! I love the idea that Shona responded to some archive film by curating a cinema screening and tour and I responded to Shona’s curation and to Deep Time with words and now someone else wants to respond to all of that and my words with a painting.

So I’m putting the words up on my blog for that person who got in touch. These words were written for performance not page, plus it’s not the same without the film but hopefully this will be useful and maybe even enjoyable. I wrote it in two weeks so there’s potentially bits I’d change and add but here it is.

Made On Our Land:

Granite.
From the latin, granum or grain.
The earth that poured forth potatoes in coarse grained granular form.
Muscovite. Biotite. Hornblendtype amphiboles.
We carried them in bowls. The potatoes.
On our first year on Marywell farm.

I missed the quarry.
Cutting the basement rock of our land.
The batholith that crumples continents into mountains.

I could hold time gone by
captured in crystals that grew as the rock cooled.
Felsic, intrusive, igneous.

We needed to keep building.
Giving.
Renovating outbuildings, along with our patterns of thinking.
Laying rock upon rock in our new lives.

We planted seeds and removed stones that once served us.
Stones that were now a stumbling block.
We shared the food we grew, giving thanks for as long earth kept on giving.

We cut farrows in fields, instead of lines in continental bedrock.
Those were good times.

I missed the dust in my fingernails,
They were brown now with earth.
Calcium meets potassium feldspar.
And I long to touch granite again…

Cut by the Ancient Egyptians
into the blocks that made the pyramids strong.
Cut from Alisa Craig
to make curling stones that glide along ice towards gold.
Cut into headstones and polished to commemorate
what once was and once… had meaning.

It’s past, it’s all in the past now.
Could the present ever lead us back there?
Looking back through time, looking through windows.
Looking close.
Plain polarised granite in thin section.
Light revealing so much beauty
in the ordinary of our lives.
We crushed the wheat to make flour for our daily bread.

3
They say time is a healer.
In time I saw the joy in cultivating the land,
our land, Scotland.
The rewards came for our toil.
We didn’t just take, we planted.
It felt kinder somehow, than the quarry.

I smelt the hyacinths in our sheltered window.
They made me smile.
The sun was warm through the glass
as photons met chlorophyll and became sweet food inside the plant.
I watched the same process out in the field
The harvesting of sunlight mixed with carbon dioxide and we have all growth and life.
All of that plant and the plants to come in one small seed.

As straw and turnips grew strong, the sheep returned our offerings with wool for the jumpers we needed to keep warm.
They kept us warm when the first snow fell, and lasted until spring.

“Can something come from nothing?” He asked.
He was wearing his sky blue woolly jumper.
“No no” I replied. “It started as a seed”. I laughed a little at his question.
“But seeds are so small, how can something this big come from something tiny?”
And I realised all at once,
all my certainty had made me miss
the wonder and mystery
that comes within a question.
Like plain polarised granite in thin section.
The closer you look,
the more questions you ask
the more beautiful it all becomes.

Made on Our Land is part of Britain on Film, a major project from the BFI National Archive, Regional and National Archives and rights holders from across the UK that reveals new and unseen stories of our lives through the history of film. Unlocking the UK’s film and TV history – our national collection, much of it previously unseen – the season will open up our local histories and provide unprecedented online access to our screen heritage. As part of a major programme of digitisation, which started in 2012 and continues until the end of 2017, Britain on Film offers ways to discover, explore and engage with the newly digitised films. Britain on Film is supported by Unlocking Film Heritage awarding funds from The National Lottery.

Thanks to Shona Thompson for having the faith to commission me and to Joey for asking me to share the words online and to everyone involved in the project. Find out about Made on Our Land and the ongoing tour here.

Posted by auntyemily on September 12, 2016 in Uncategorized