RSS
← Travelling in Time and Space
The Wave Project → 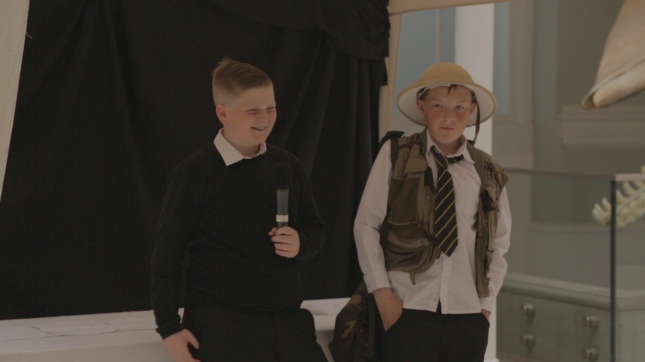 I’ve been working with secondary pupils to help them to write and perform science shows in a project called Museums2Go. The pupils were based in Apex inclusion units in Braeview Academy Dundee and Dunfermline High School. I was working for the National Museums Scotland and in partnership with Science Made Simple.

The National Museums Scotland have just published a new video with some highlights from the project:

The pupils trained to become science communicators, they chose the science demonstrations from a menu (put together by Science Made Simple and based on the themes of the new galleries) and finally they wrote their own scripts. They also practiced and performed their science shows at the National Museum of Scotland.

I worked directly with groups of pupils through several school visits and day visits to the museum. My role was to facilitate the choosing of demonstrations, writing the scripts and practicing / performance too.

I think the main challenge for the pupils was one of confidence – these pupils had to leave mainstream education for various reasons. I kept telling them that they could achieve something brilliant if they put the work in.

The pupils worked hard to write and practice their shows. They came up with brilliant ideas for the stories to link the show together, they had ownership over their shows. There were a few fall outs but that’s all part of working in a creative team and relying on each of the team members to do their bit. They presented to and entertained a live audience in the National Museum of Scotland with a show that they had written – that’s a huge achievement!

I enjoyed getting to know the pupils throughout the project and seeing them improve in confidence and build ideas as a team together. I also loved working with the National Museums Scotland and Science Made Simple.

I was part of a pilot for this project where we trained Holyrood High school pupils to become science presenters. They didn’t write their shows but they did do an awesome job of presenting Alex’s Amazing Adventure at the museum. I wrote about my experience of the working with the pupils here. There’s a lovely video on this stage of the project too:

The exciting thing is I’m now about to run science communication workshops for a new age group – this time it’s with primary school pupils at Stanley Mills in Perthshire. I’m excited about sharing science communication skills and tips with younger ones – some as young as age five. I’ve been planning fun ways to get basics across and also to make them laugh by doing things well and then doing things wrong (obviously safely – I mean like talking really fast or folding my arms and looking grumpy) and getting them to tell me how to improve. I’ve planned some fun games to cover the basics of presenting and they’ll all get a chance to do some science presenting too. I’ll be running workshops at Historic Scotland’s Stanley Mills tomorrow and Thursday.

The Museum2Go project is funded by the Robertson Trust. Read more about Museums2Go on the National Museums Scotland website here.

← Travelling in Time and Space
The Wave Project →