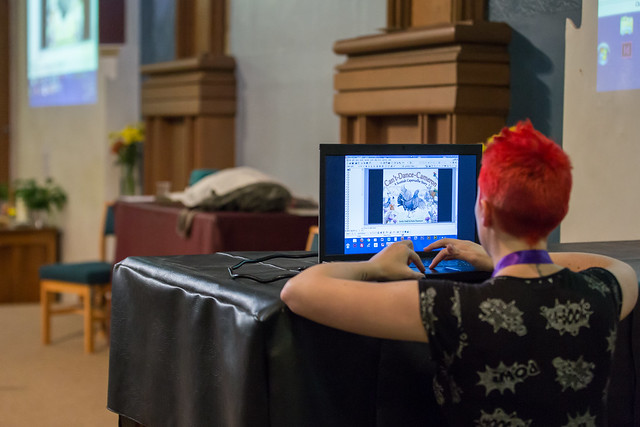 Last week my first picture book ‘Can’t-Dance-Cameron: A Scottish Capercaillie Story’ launched in Edinburgh. STV Edinburgh wrote about it here. There were a couple of exciting announcements at the launch:

1) Can’t Dance Cameron is on a reprint. That doesn’t normally happen on the day a new book launches – the book was actually out in shops in Scotland a couple of weeks before the launch because of the Edinburgh International Book Festival. Thanks to everyone who’s been buying the book.

2) My new book ‘The Grouse and the Mouse’ is out next year – I had to keep that secret until now. I signed the contract at the beginning of August and wrote the first version of the book last year. It’s changed a bit since then and it’s now about ready to go to an illustrator. Very exciting.

Back to the launch, here it is in pictures, thanks to photographer Chris Scott. I’m like Can’t Dance Cameron – afraid I’ll look silly dancing BUT Chris somehow managed to get a photo of me in mid-air – he described it as an ascension shot. And I look, well,… almost graceful.

The evening started with drinks, nibbles, networking and chat. People took their seats ready for the launch to begin: 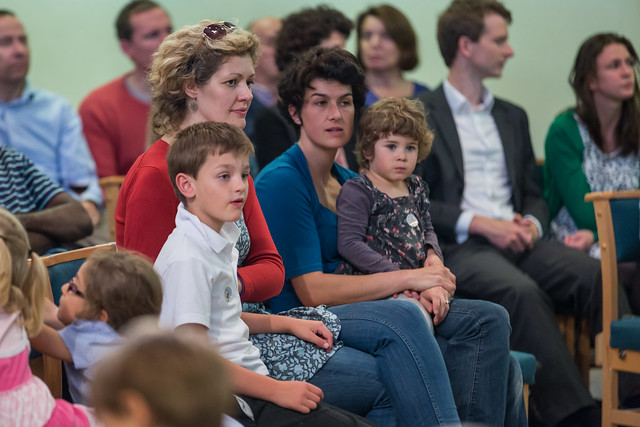 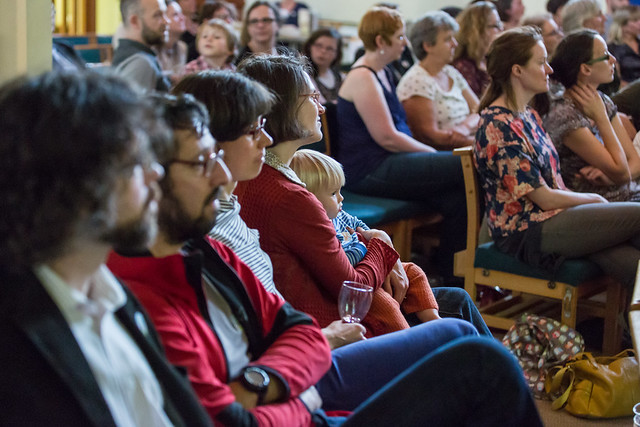 The Chief Commissioning Editor at Floris Books, Eleanor Collins introduced people to me and the book: 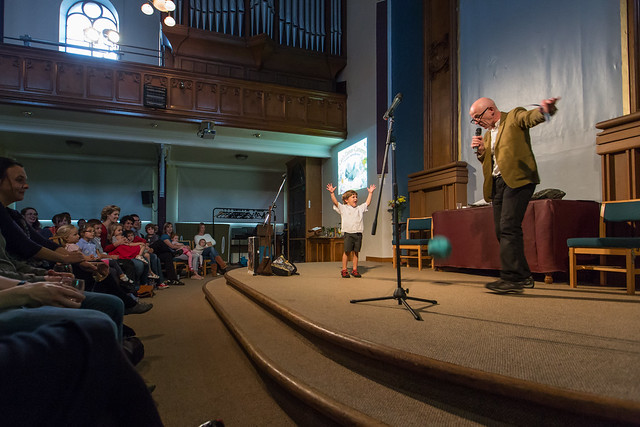 There were six comedy stories on my interactions with birds through the ages:

We got three stories depending on the dice throw: 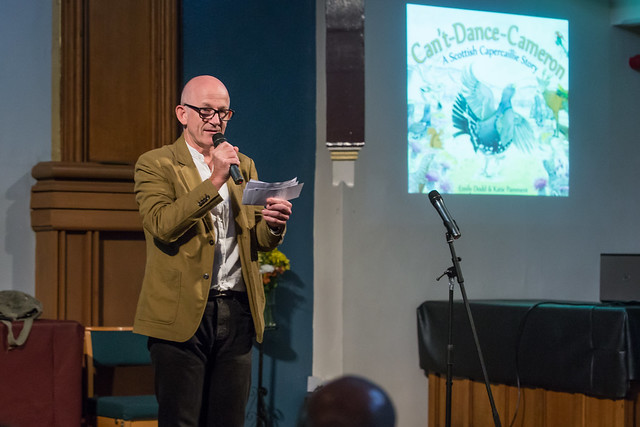 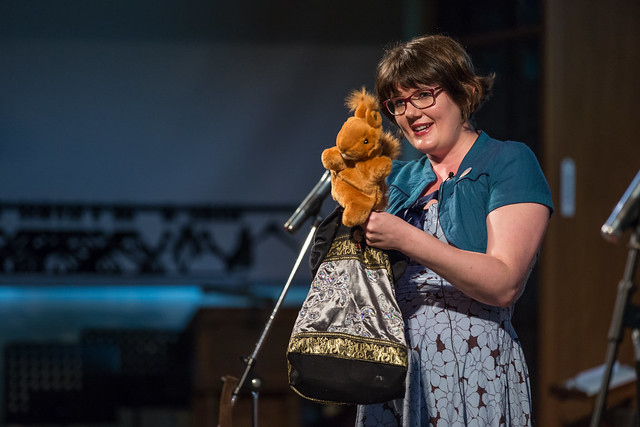 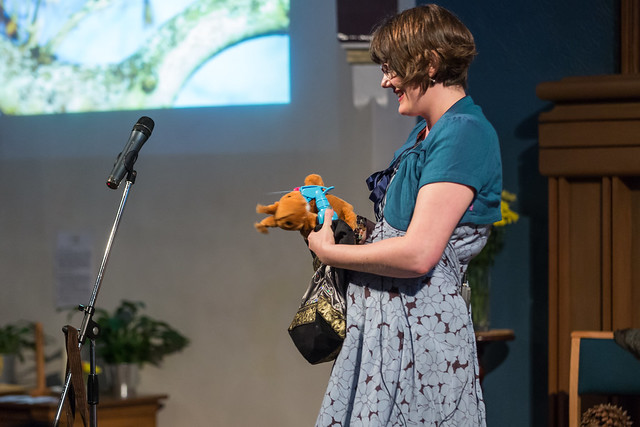 Here are the expert volunteers who fanned the smell of the pine forest all around the audience: 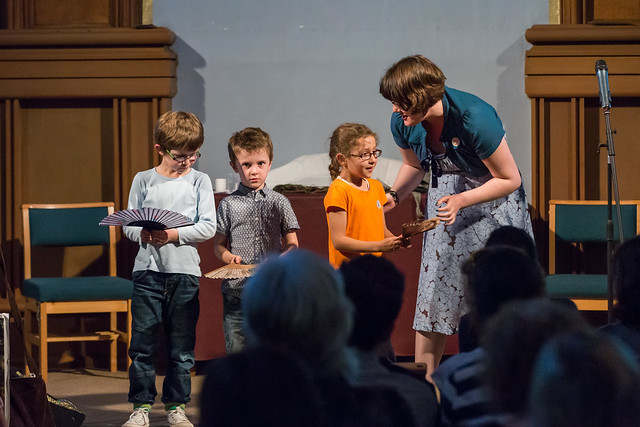 This is an actual giant pine cone – from the USA. We practiced a firework style “ooooh!” and “Ahhhh!” when the pine cone came out – ready for later in the story… 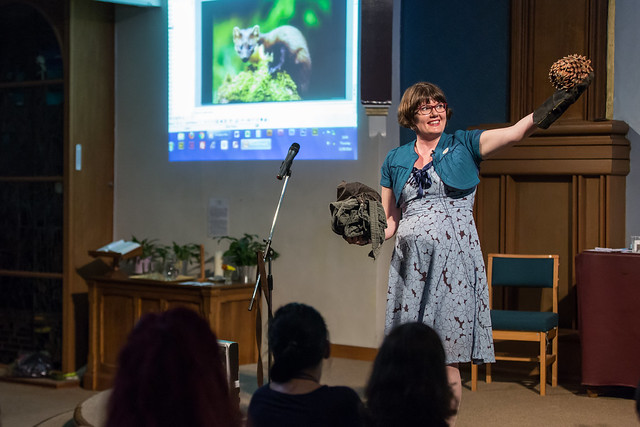 This was a red squirrel true or false quiz – you had to make the shape of a T or an F with your body: 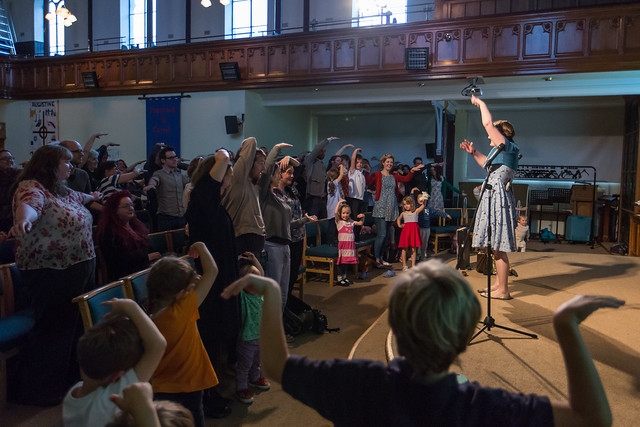 Then out came the football pine cones – Bethan and Roo volunteered: 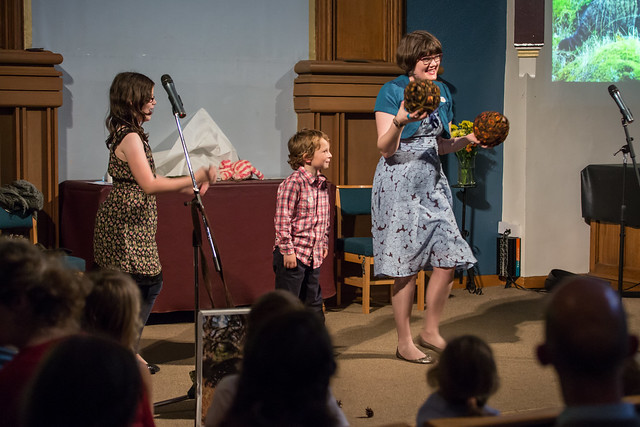 Here’s Bethan kicking the pine cone past the wild cat to distract it. That’s Adele, she’s works at the Botanic Gardens and she’s pretending to be a scots pine. 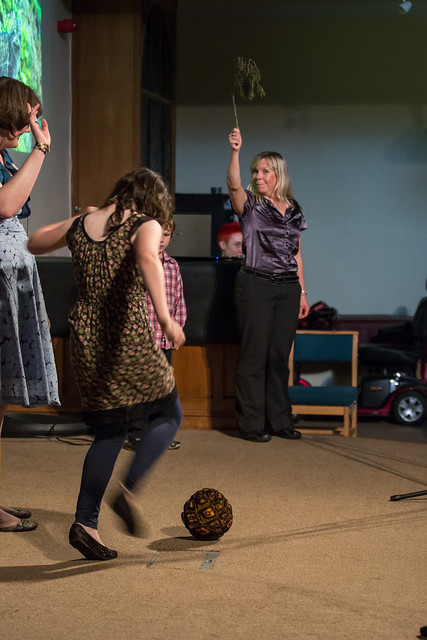 Then we learnt the dance moves, this is the assertion shot I mentioned earlier. Look at my feet! 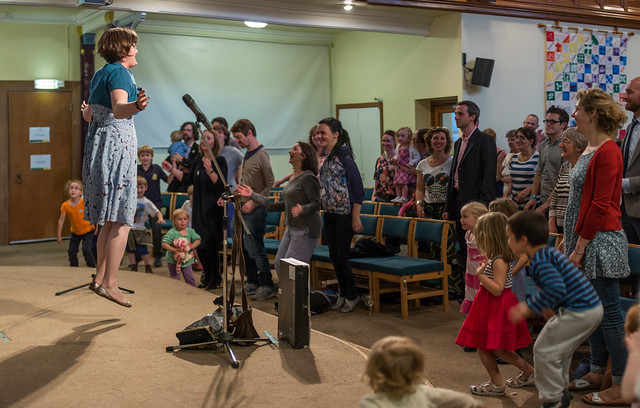 Then a quick science experiment to make the capercaillie popping noise using an alka-seltzer rocket! 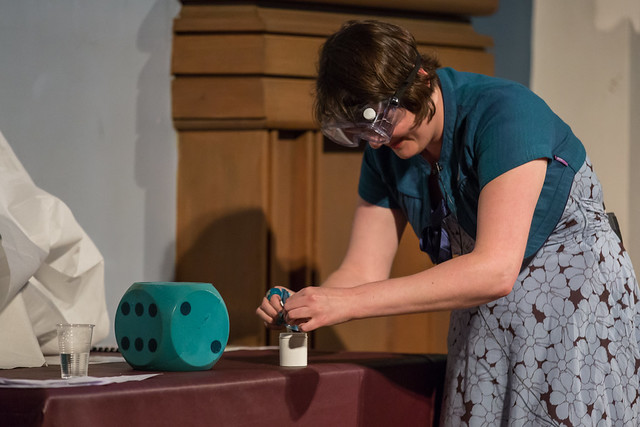 Then we put the dancing together with the music and everyone joined in: 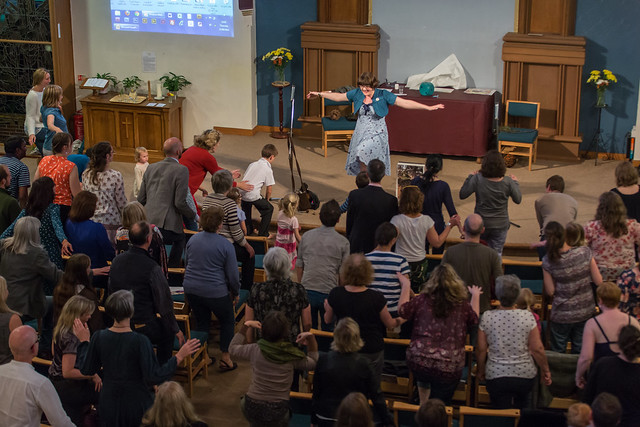 Here’s a sample of the track, click play below:

Then I shared the story with the pictures up on the big screen: 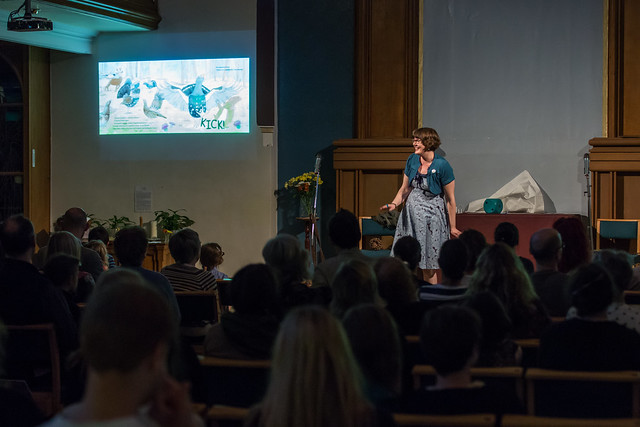 With some actions along the way: 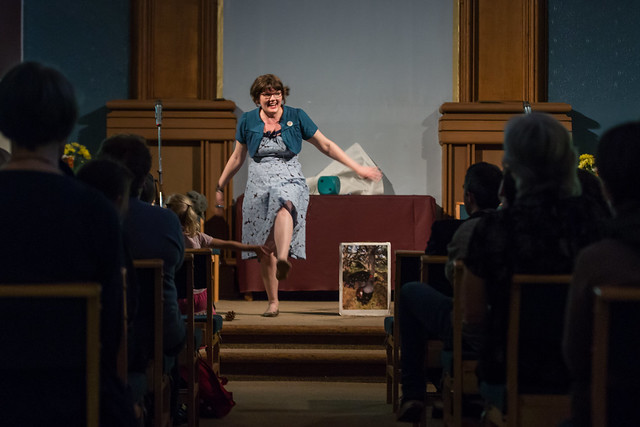 After that it was time for the Q and A chaired by Bookriot blogger Edd McCracken: 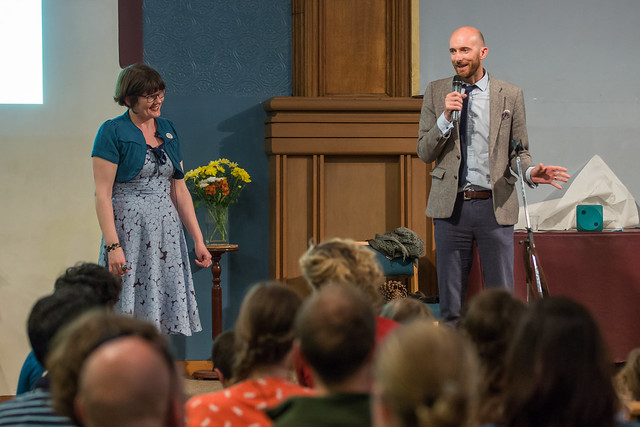 There were some great questions from the audience including: 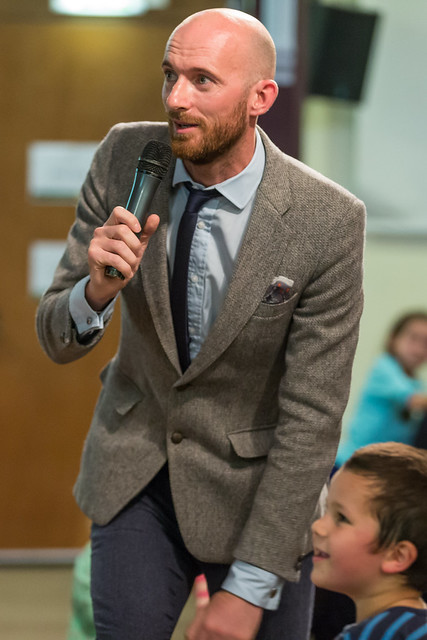 Then there were some thank yous, hosted by poet Elspeth Murray: 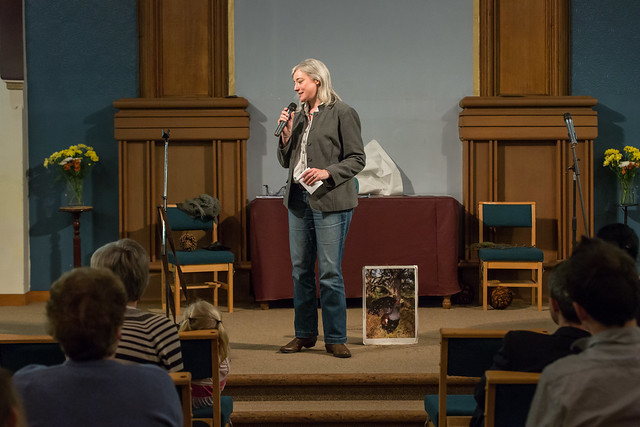 On my behalf and then I said a few thanks to: 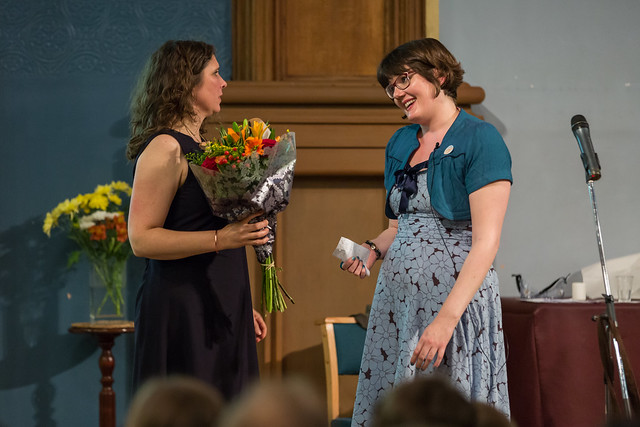 I also thanked everyone for coming and for buying books. Finally Kirsten the publicist from Floris came up to say a final thanks – it was a lovely surprise to be given some flowers too! 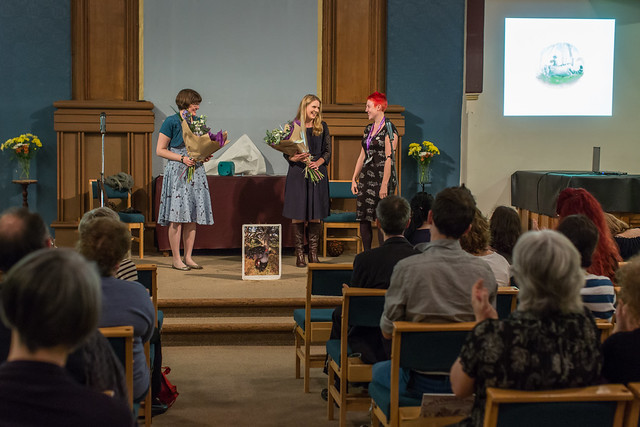 Then a sort of double queue formed, here’s a slightly awkward moment when two people thought they were first in line! 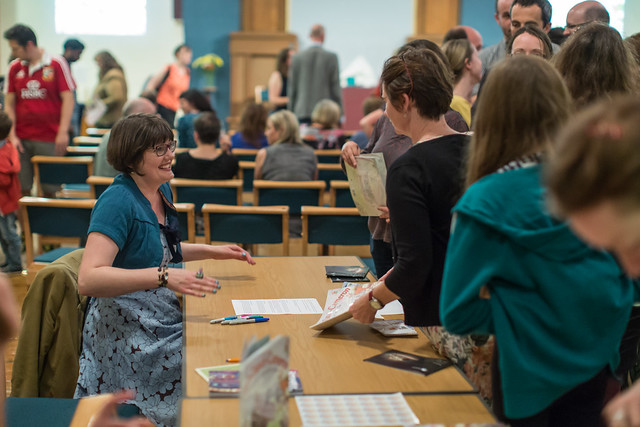 It was lovely to meet people and sign copies of the book. The illustrator Katie Pamment signed too – it’s not every day you get a first edition signed by the author and the illustrator: 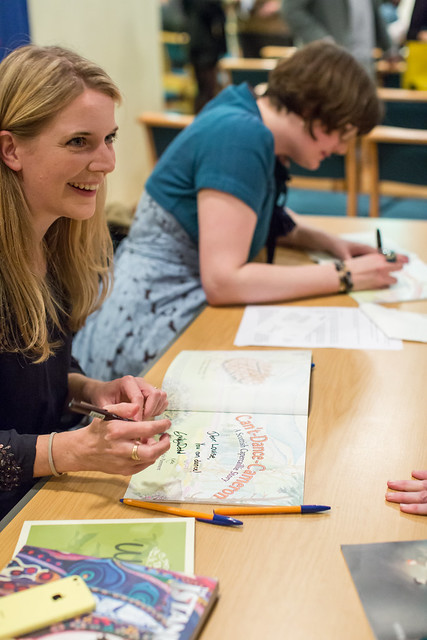 This is near the end of the queue. By the time we finished all the wine had run out – before I had chance to drink any!

See @auntyemily work it with dancing and kicking and children and her new book… https://t.co/WH2G0Lu7qW

Lastly here are some of the tweets from the event. Floris books put some together in a storify too, find it here.

What a launch @auntyemily! Great to see one of our @SCBWI_BI gang operating with such pzazz And @roy_gill – what a mover!! @DiscoverKelpies — Louise Kelly (@mllouisekelly) September 12, 2014

loving @auntyemily @FlorisBooks launch of Can’t dance Cameron. @JonathanMeres working the preschool crowd: “I was 4 when I was your age.” — Sheila Averbuch (@spacekidsbooks) September 11, 2014

The most dancing, wafting, wiggling and wooshing I’ve ever seen at a book launch. Thank you @auntyemily and Can’t-Dance-Cameron! — morag edward (@velocityM) September 11, 2014

Delighted to be at the launch of Can’t Dance Cameron by Emily Dodd. Lovely childrens book based on native wildlife

@auntyemily A triumph! Had a lovely time – hope you did too! Congratulations x