RSS
← Singing stars and a stegosaurus
He Blew Me a Kiss →

Last month I led a 3-hour Filmpoem workshop with five children aged between five and ten as part of the first UK Filmpoem Festival in Dunbar.

The workshop started with exercises and games to get the children thinking like poets (I wrote a bit about it here). Then we spent the second half of the workshop writing a group poem on a poetry walk.

Each child worked independently during the challenge but we came together in a circle at the end of each challenge and each contributed one line to the poem.

Three moments really stood out to me. The first was when we stopped after the first poetry challenge. I wrote down each of their lines as they said them. I rearranged the order slightly and read it out. All of the children looked at each other with amazed faces and they said things like “Wow!”. From that moment on they were totally focussed.

During the walk artist Alastair Cook was capturing film and composer Luca Nasciuti recorded sounds. When we were down on the beach Donald (5) was in the process of finding his favourite object when he made a discovery….

“I’ve found a sound for the film!” he shouted. He was sitting down with a handful of mussel shells in his hands and he shook them to show me. He tipped his ear towards the shells again to make sure they sounded right. “That’s brilliant Donald” I said. “Let’s show Luca so he can record it” and I called Luca over and Donald shook his shells again.

My final favourite moment was the screening. The film premiered later that day at the Filmpoem Festival. The children brought their parents along to see it. I think you’ll agree their poem is amazing and the film (thanks to Alastair and Luca) is wonderful:

I want to add at no point did I suggest lines or change their words, I only changed the order of some lines so perhaps Donald’s line came after Kitty’s instead of before. Every section was written during that stop on the journey and so the poem is linear in the order of the journey made.

I enjoyed planning the workshops activities and the stops on the walk. I hoped it would work well but until you actually do something you don’t know how things will turn out. I was impressed by how well the group responded and how they worked so brilliantly as individuals to create something wonderful together. It was as if something magical happened, they seemed to share one collective creative brain that was five times better than any individual’s could be. Their lines fitted perfectly together and each section fitted perfectly with the last. They had so much freedom to create and they were enjoying every minute of it.

I love the film, Alastair and Luca did an amazing job of putting it together.

What did the children think?

They were proud of their poem and they said it was fun and not like writing poetry at school. They also said it was easier to write about things when you’re outside experiencing them.

Here’s some of their comments:

I loved feeling the wall and going to the beech..

You can see the rest of their comments below, It’s good to see Donald wrote about his shells! 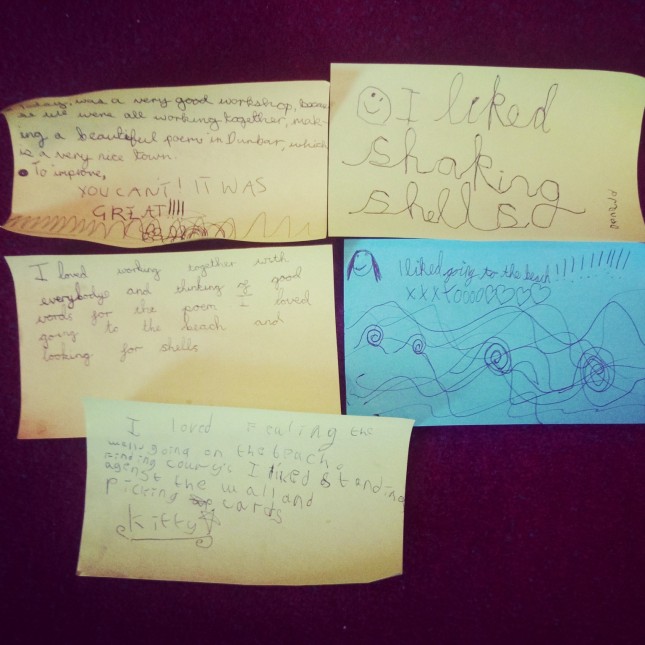 ← Singing stars and a stegosaurus
He Blew Me a Kiss →