RSS
← Bike Helmet On
Nina and the Neurons: Go Engineering →

Hopes For The Future and What If…

I’m trying to set some goals for the year ahead and write an annual general review of 2012. I’m finding it difficult. I had a look at last years review and my hopes for the future were

I thought about if I’d achieved them and I wondered what I should add to the list. I wrote lists of top fives for 2012 but I got a bit lost in what the purpose of it all was. Then I read Milo’s McLaughlin’s Clear Minded Creative New Year’s ‘what ifs‘. These ones really stood out to me:

What if.. someone told you they believe in you?

What if.. you told someone you believed in them?

What if.. you believed in yourself?

What if… you used your knowledge or skills to help others?

What if.. you honoured your heart’s desires instead of chasing meaningless goals?

It became clear. It reminded me of when I work with groups of five-year olds…

We make stars to remind us that we’re all like stars that shine in the sky. I ask them if they know a song about stars. We sing it and we talk about Mozart who wrote Twinkle Twinkle Little Star when he was just 5. 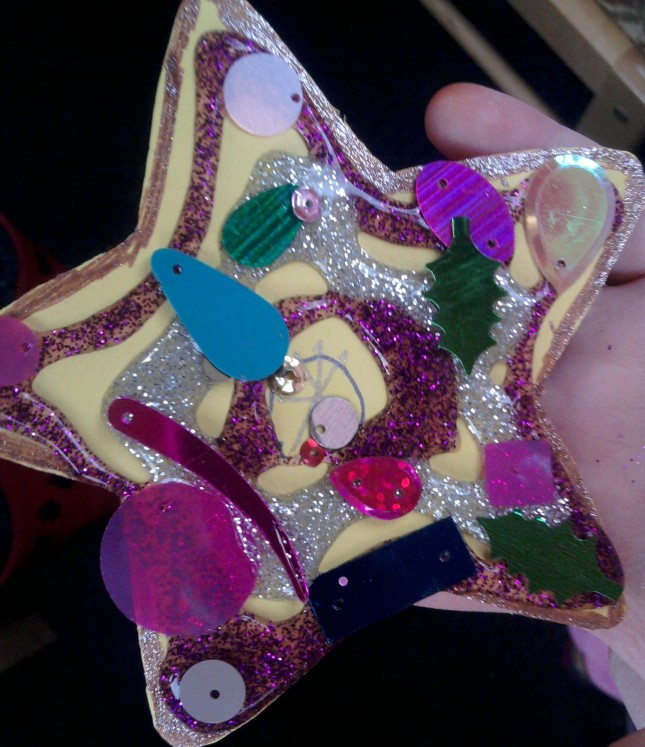 What if someone had said “that’s a rubbish song, why are you playing that?” He might have stopped. But someone probably said, that’s a good song…

I give them wrapped up presents. We unwrap them to discover the presents are words and we talk about how important it is to give each other good words because they help us to grow and shine.

I explain that I gave up writing when I was little because I didn’t know I was any good at it. Now I’m writing for CBeebies because someone told me I was good.

I tell them to tell each other.

If someone’s a good friend, tell them. If they’re amazing at football, tell them.

I tell them they’re all good at something and they’re probably good at lots of things.

I say if you don’t know what you’re good at yet it might be because no one has told you you’re good at it. Or you might not have found it yet. Sometimes things are hard when you start but if you keep trying you get good at them. Like walking or swimming, could anyone do that straight away?

Someone enthusiastically gives an example of how when they first went to ballet it was really hard but now they love it and we all nod in understanding.

I realise now I got so lost in trying to categorise 2012’s top fives that I forgot the bigger picture. I forgot why I became a freelancer and what I really think is important. I forgot the lessons for five-year olds are the lessons I need to keep learning. So I’ve written this as a reminder of Mozart and how we’re all made to encourage one another. We’re all made to shine. Tomorrow I’ll get back on track and write my annual general review.

Posted by auntyemily on January 7, 2013 in Education

← Bike Helmet On
Nina and the Neurons: Go Engineering →

8 responses to “Hopes For The Future and What If…”