Social Reporting at the Poverty Assembly

Tomorrow it’s the 3rd Scottish Assembly for Tackling Poverty at the Royal Concert Hall, Glasgow. I’m volunteering with a team of social reporters to cover the event from the inside. We aim to show you what it’s  like to be there. We’re using audio and video to capture the action as and when it happens.

What’s it all about?

How do you take part?

Check out the agenda for the day and watch the live event here. The social reporters will be uploading videos to YouTube and audio to SoundCloud. If you’re on twitter you can follow the hash tag for the event, #povertyassembly. I’ll be tweeting throughout the event as me, @auntyemily.

How did I get involved?

A couple of weeks ago Ross McCulloch ‏posted this:

I followed the link to discover the Poverty Alliance were looking for volunteers to cover the assembly as social reporters. They would provide training in audio, video and photography with Ross McCulloch and Erin Maguire. I already use these tools and thought the training sounded ace, I could only make day one of the conference (I’m on the CBBC Lab Friday) but they said they would be delighted to have me just for one day on the Thursday.

Poverty is a massive issue in Scotland and I know I don’t know enough about it. I wanted to attend the conference to find out more about issues that matter and use the skills I have to help share these issues with the rest of the world. Last year’s event got passionate. There were tears and shouting. I know this matters to people and I want you to know about it, I guess that’s what social reporting is all about.

Here’s one of Ross’ photo of our training session in action. 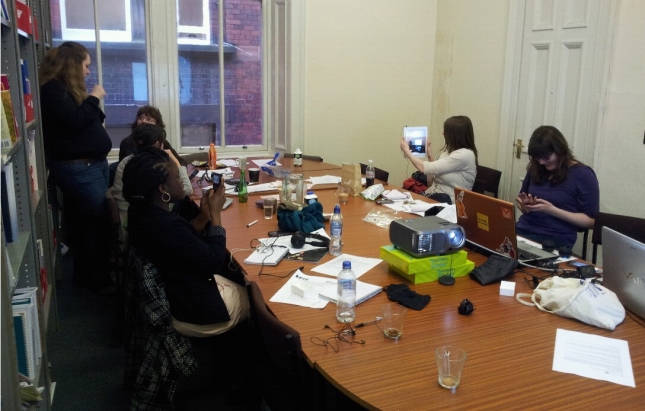 Erin and Ross were fab. I was particularly inspired by clips of ‘Documentally‘, a professional social reporter. His use of basic equipment in new, fun and engaging ways inspired me and gave me the confidence to give it a go.

We’ve been set the challenge to get a least one video per session and to start the day with a short video intro saying who we are. I’m a bit nervous about that first one! I’m also excited about talking to the people at the conference and I love the challenge of trying to capture it live, upload it live and move on to capture again.

Just now I’m going to wipe a few files off my video camera and charge some batteries. I’ve got an early start tomorrow, yikes! That’s me signing off for now but please do say hello if you’re following the live stream (:

Posted by auntyemily on March 15, 2012 in Education, Events, Media

5 responses to “Social Reporting at the Poverty Assembly”